skip to main | skip to sidebar

To see examples of my paintings visit www.barrysstudio.com/gallery.

Today’s blog is about taking down some notes on various perspectives that are used in drawing pictures and underlining paintings. One or more of these techniques can be used in prep work for creating a drawing or painting composition. 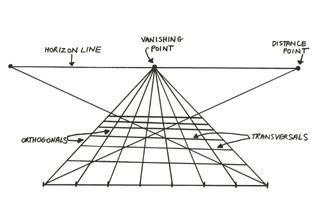 Linear perspective is a mathematical technique for projecting the illusion of a three-dimensional world on a two-dimensional surface. This artistic perspective begins with a horizon line that defines the farthest distance of the background and a vanishing point. Orthogonals are drawn from the bottom of the picture plan to the vanishing point. This approach is used to define the foreground of the space. Figures and objects are drawn and related to orthogonals, the vanishing point, and the horizon line.  The image above expresses this perspective.

Reverse Perspective
It’s hard to believe we once did not understand linear perspective. Before the Renaissance period, reverse perspective was used in creating compositions for artwork. This technique leveraged off parallel lines that splay rather than converge as they approach a given horizon line. In sum, objects above the horizon line were drawn downward, and below the line were drawn up.

One Point Perspective
This technique only has one vanishing point that is identical to the principal point location on the horizon line.

Two Point Perspective
This technique uses two vanishing points. Neither of them are principal points that define a single vanishing line (horizon line).

Anamorphosis Perspectives
This technique defines a deformed image that appears in its true form when viewed in an unconventional way. It involves an artist drawing a grid over an original image and then translating the image block by block to a grid on a stretched surface. The desired viewing position for the composition would entail the eye of the viewer being positioned from a particular spot to see the appearance in a linear perspective – usually viewed from the side. 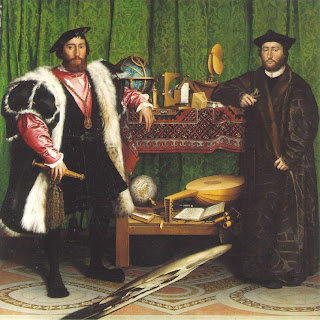 The above figure expresses this technique in the skull at the bottom of the painting. If you close your left eye, and put your right eye next to the screen, about half way up the painting and about 5-10 cm to the right of it, you will see its true intended form.

This technique is similar to Trompe L’oeil. For anamorphosis, the viewer is presented with something that does not make sense when viewed conventionally, but unconventionally one can see its true form. For trompe l’oeil, the viewer standing in a conventional place and the perspective tricks the eye into thinking the three-dimensional image is real. Below is a fresco painted ceiling capturing this illusion. Image one reflects the conventional view, as image two does not. 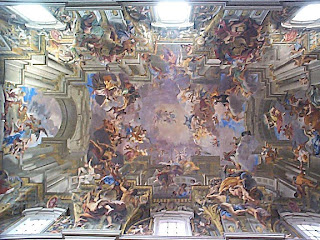 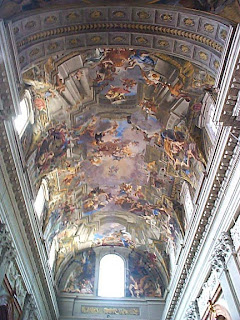 Curvilinear
This technique involves an artist drawing straight lines with an arch to them. Below, image one reflects a linear perspective. Image two reflects curvilinear.

Some of the information above has been obtained from a more detail source:  www.handprint.com/HP/WCL/perspect1.html.
Posted by Barry at 6:12 PM No comments: